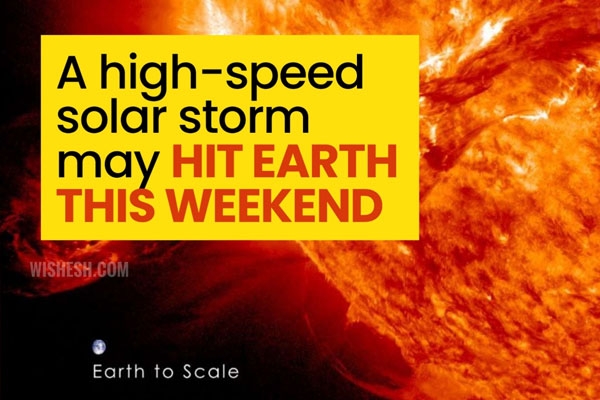 A high-speed solar storm may hit Earth this Weekend

A high-speed solar storm may hit Earth this WeekendTop Stories

The coronavirus pandemic turned out to be a major disaster for mankind. The experts now hint about a solar storm that will hit the earth this weekend. A geomagnetic storm will hit the atmosphere of the earth this weekend and the weather forecasters issued warnings about the same. This storm is a result of the solar winds that are traveling at a speed of a million miles an hour. The experts predict that this solar storm will hit the earth on Sunday and Monday. It is heard that there is a hole in the atmosphere of the sun and this is leading to the solar winds. The storm is now moving towards the earth and it is expected to hit the planet soon.

These strong winds will trigger a geomagnetic storm in the magnetosphere of the earth and this causes emergency of auroras in latitudinous regions of north and south. A geomagnetic storm is a major or minor disturbance that occurs in the earth's magnetosphere due to the exchange of energy from solar winds. As per the predictions of the National Aeronautics and Space Administration (NASA), the solar winds will blow at a speed of one million miles per hour which is huge. As per NASA, the winds are traveling at a speed of 1.6 million KM per hour towards the earth. The speed may increase or decrease. National Weather Service's Space Weather Prediction Center in June predicted about G-1 class geomagnetic storm that will hit the earth. It is said to be formed due to the swift solar winds.