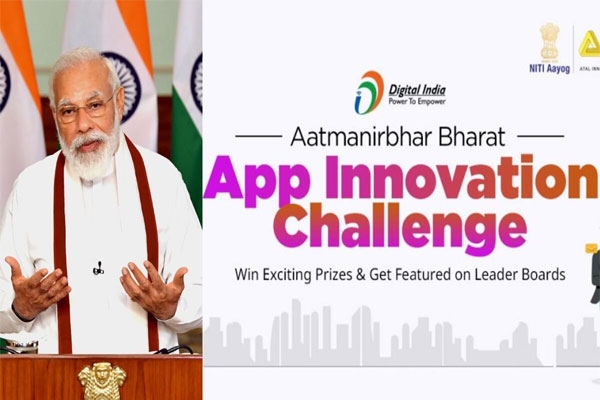 Prime Minister of the country, Mr. Narendra Modi has announced the new Digital Indian AatmaNirbhar Bharat App innovation challenge which aims at improving the Made in India apps globally.

On Saturday, Prime Minister Narendra Modi has taken the AatmaNirbhar Bharat one more step ahead by announcing this new initiative. He launched an App innovation Challenge to improve the Indian App system in the market. This initiative is a part of ‘Make in India’ movement and the self-reliant speech that the Prime Minister gave a few weeks ago.

The project is launched by the Ministry of Electronics and Information Technology (MeitY) in partnership with the Atal Innovation Mission and government think-tank Niti Aayog.In the announcement tweet PM Modi expressed that the world of technology in India and start-ups are showing immense enthusiasm on creating new and Make in India apps. So to acknowledge their effort and build their enthusiasm the government has launched this AatmaNirbhar Bharat App Innovation Challenge.

The Indian government had recently banned 59 of the Chinese based Apps including popular ones like TikTok and UC Browser. The government is also looking to find replacement of these 59 Chinese apps which were banned in the country.

The Track one of the Challenge will be launched in eight different categories. These eight categories include Office Productivity & Work from Home, Social Networking, E-Learning, Entertainment, Health & Wellness, Business including Agritech and Fintech, News and Game.

How can you apply for the App Innovation Challenge?

What’s the catch of entering this App Innovation Challenge?

You will be judged by a jury which will be appointed by the government for each of the 8 tracks. This jury will also include personnel from the private sector and also academics experts to evaluate the entries. After the evaluation by the jury, these apps will be give awards and features on Leaderboards for information of Citizens which is a huge deal. The evaluation criteria for the entries are based on various rating features, some of them include the ease of use, robustness, security and scalability

Not just that the government will also adopt certain apps and guide them to maturity by listing the on government marketplace.

This App Innovation Challenge seems to be an initiative to promote Make in India apps and also the AatmaNirbhar Bharat initiative. The eight categories also fall under the categories of the 59 Chinese apps banned from India. Though the government hasn’t given an official statement yet, but it looks like Indian government wants to take this initiative as an extension of the earlier challenge announced to build India’s own video apps. Indian Government is also going the extra mile to the startups and technology of the country and encouraging them to create more.