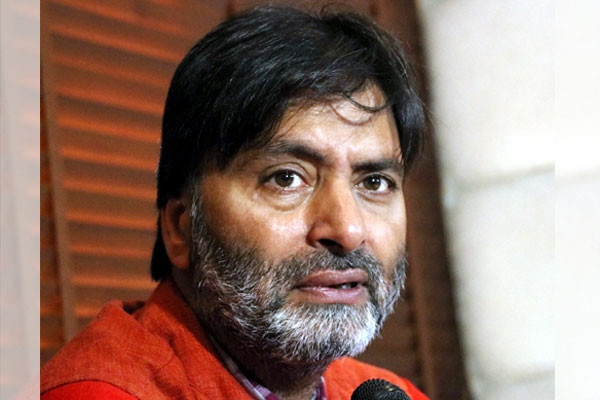 In major crackdown against separatist elements in valley, Jammu Kashmir Liberation Front (JKLF) headed by separatist leader Yasin Malik was banned by central government under anti-terror law on Friday. The government said it is strong action to curb terrorism in Jammu and Kashmir.

It said that Government is committed to relentlessly pursuing the policy of curbing the activities of secessionist organizations which are threat to unity and integrity of the country.  NIA and Enforcement Directorate are taking strong action against these organizations.

“Jammu & Kashmir Liberation Front led by Md. Yasin Malik has spearheaded the separatist ideology in the valley and has been at the fore-front of separatist activities and violence since 1988. Murders of Kashmiri Pandits by JKLF in 1989 triggered their exodus from the valley. Md. Yasin Malik was the mastermind behind the purging of Kashmiri Pandits from the Kashmir valley and is responsible for their genocide.

JKLF has many serious cases registered against it. This organisation is responsible for murder of 4 Indian Air Force personnel and kidnapping of Dr. Rubaiya Sayeed (daughter of the then Home Minister Mufti Mohammad Sayeed in Shri V. P. Singh’s Government). This organization, alongside, is also responsible for illegal funneling of funds for fomenting terrorism.  JKLF is actively involved in raising of funds and its distribution to Hurriyat cadres and stone-pelters to fuel unrest in the Kashmir valley as well as for subversive activities. Activities of JKLF (Y) pose a serious threat to the security of the country and are prejudicial to the territorial integrity and sovereignty of India,” the statement added.

Earlier, the Union Home Ministry also declared ‘Jamaat-e-Islami (J&K)’ as an unlawful association under the provisions of Section 3(1) of the Unlawful Activities (Prevention) Act, 1967.