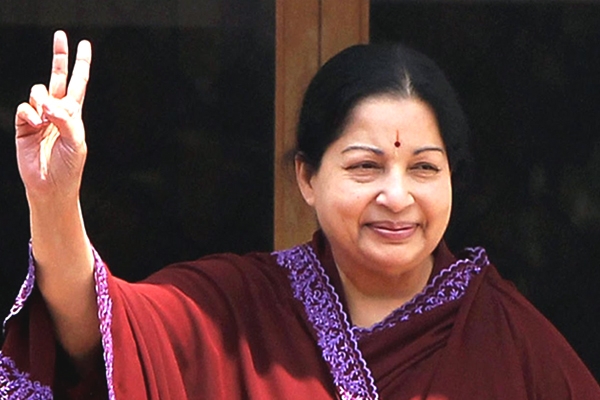 At her 10th election rally in Coimbatore, on May 1st, Tamil Nadu chief minister J. Jayalalithaa has shifted the campaign into top gear. She said that DMK chief M.Karunanidhi, accusing him of launching schemes, that benefit only his party leaders and his family.

"In 2006, the DMK has given television sets worth Rs 2,000 each but collected Rs 3,000 for each cable connection". She said at a rally at the Codissia grounds. "With this itself, the DMK leaders have made Rs 25,000 crore in the cable connection. They make promises to gain power, but will implement them for their benefits.”

For the may 16th elections, AIADMK general secretary J. Jayalalithaa on Thursday released her Party’s manifesto. J. Jayalalithaa said hundred units of free power would be given to all households.

"Already there has been an increase in the electricity prices, and Amma is offering 100 units of power. A resident in the state Sethuraman Iyer, questioned? How is it possible to give so much free power when they are in debt?"

Amma Replied -"I have done everything that I had promised, I will do and I have also done those that I haven't promised as well.”

“The upcoming election is very crucial and do not vote for people who are planning to cheat you," ‘Amma knows what to do and when to do'.

The manifesto is filled with so many promises and people of Tamil Nadu have benefited from schemes like  Amma canteen, Amma water, Amma salt, Amma Pharmacy and other Amma goodies. Adding to the list now is, Amma banking card.

---Free bus travel facility for the senior citizens.
---Churches and mosques will be renovated.
---set top box will be given free of cost.
---Victim A, D Iron tablets will be given.
---breakfast for school children.
---CM’s medical insurances scheme will continue.

Hope all this benefits will reach people and make Amma win in the elections.

The answer will be on 19th may elections