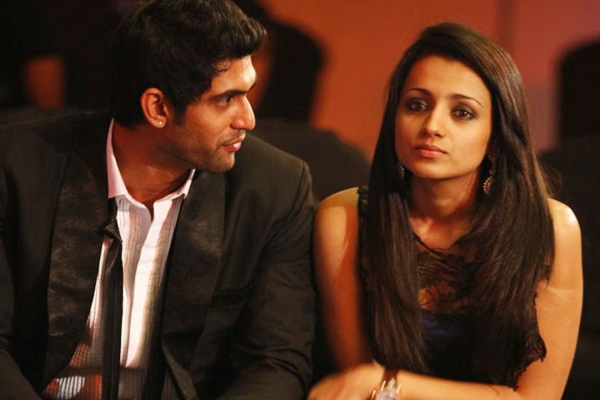 Are Rana Daggubati and Trisha Krishnan Back Together? Sources Say, Yes!Tollywood Hot Gossips

South Indian actors Rana Daggubati and Trisha Krishnan, who has a huge fan base and widely known, seems to be giving their relationship another chance, according to sources.

The actors have humongous fan followers on their social media page. In the sixth season of Koffee with Karan, in which Baahubali team recently shared the couch, the show’s host Karan Johar popped a question to Rana with regards to his equation with Trisha.

The Baahubali star didn’t ignore the question but instead spoke about his relationship and parting ways with Trisha.

However, presently, some posts on Twitter have raised several eyebrows and fans are wondering if Rana and Trisha are trying to rekindle their relationship.

On the occasion of Valentine’s Day, Arya and Sayyeshaa announced about their wedding which is going to take place next month. Shortly congratulatory messages started pouring in from fans and other celebrities. But it was Rana Daggubati and Trisha’s wishes and Arya’s reply to it which caught attention, from where the rumors started doing rounds that Rana and Trisha might have started dating over again.

Rana Daggubati tweeted, “Machhhhaaa Congatulations!! Happy last Single Valentines to you. [sic]”. Trisha Krishnan replied to Rana’s tweet by posting, “Damnnnn he did it Congratulations uuuu beautiful people. [sic]” Arya responded to their comments stating, “Haha Thanks macha Waiting for urs. [sic]” Ever since this conversation on the micro-blogging site has taken place, rumors about Rana and Trisha’s relationship status are doing round the mills.

Rana Daggubati and Trisha Krishnan called off their relationship after the former’s family allegedly did not approve of it.

In January 2015, Trisha exchanged rings with a Chennai-based businessman, Varun Manian. But then, a few months after the engagement ceremony, it was revealed that Trisha and Varun called off their wedding.